The Hurun Research Institute today launched the SICA·Hurun Global Art List 2022, a ranking of the Top 50 artists in the world alive today, based on the sales of their works at public auction in the year ending 31 December 2021. This is the third year of the Hurun Global Art List.

AVERAGE AGE WAS 68 YEARS OLD, THE SAME AS LAST YEAR. 9 ARTISTS WERE 50 YEARS OR UNDER, 1 LESS THAN LAST YEAR 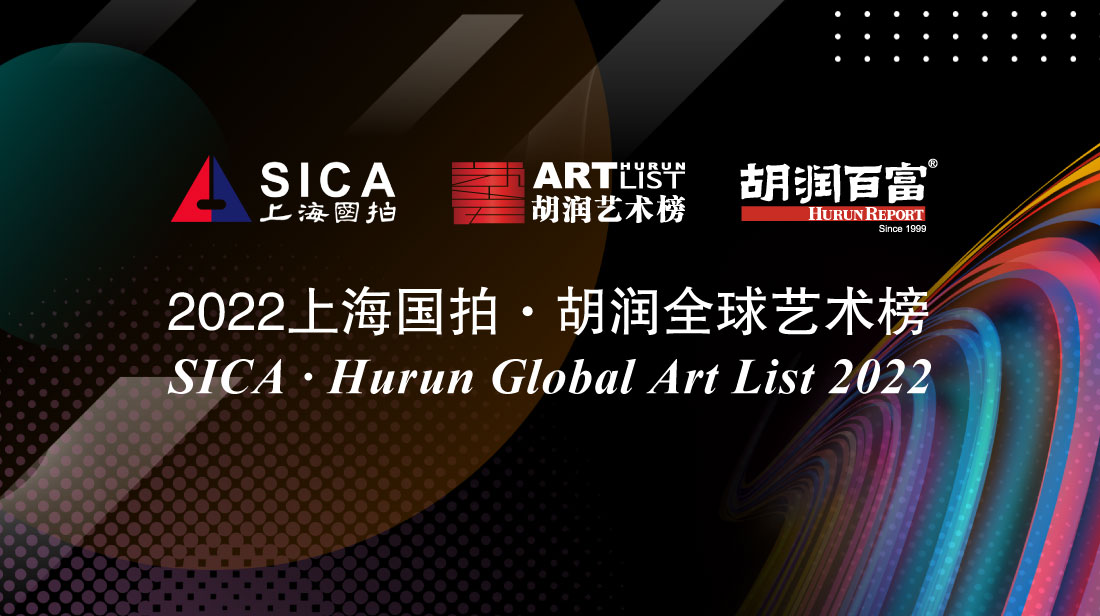 (11 November 2022, Shanghai) The Hurun Research Institute today launched the SICA·Hurun Global Art List 2022, a ranking of the Top 50 artists in the world alive today, based on the sales of their works at public auction in the year ending 31 December 2021. This is the third year of the Hurun Global Art List.

Artprice.com provided the art auction data for non-China, whilst China data was from Artprice, Artron and Artpro. The appendices contain the full Hurun Global Art List, together with the Hurun China Art List 2022 and Hurun India Art List 2022.

Hurun Chairman and Chief Researcher Rupert Hoogewerf said, “This has been a good year for the global art market in that sales at public auction for the Hurun Top 50 living artists was up 60% year on year, suggesting that more quality art is coming to the market.”

“The idea behind the Hurun Art List is to encourage the world’s most successful entrepreneurs to start collecting art, leveraging the 8 billion views on the Hurun brand last year from our various country and global rich lists. We have been doing that for 15 years in China with the Hurun China Art List, encouraging the Hurun China rich listers to start an art collection and for the last 3 years in India with the Hurun India Art List. The reason for focusing on living artists, is to encourage the world’s top entrepreneurs to meet with them, to see their studios, perhaps have a meal with them and get to know them. The beauty of basing the list on the sales of their works at art auction is that it provides for an easy to understand measure, taking out any subjectivity in the ranking, and over the years, the truly great artists of the generation will become apparent.”

“NFTs is having an impact on art, especially contemporary art.  Damien Hirst, one of the Hurun Global Art List artists, publically destroyed 3000 of his physical artworks, giving his collectors the choice of keeping the original or the NFT.”

“The comparison between China and India makes for curious reading. Despite both having populations of 1.4bn people, the difference in values between their top artists is significant. The works of China’s top living artist, Cui Ruzhuo, for example sold at public auction last year for US$95 million, whilst the works of India’s top living artist Anish Kapoor sold for just under US$3 million. The cut-off to make the Top 50 of the Hurun China Art List was US$2 million, whilst for the Hurun India Art List it was US$20,000.”

Dai Peihua, chairman of SICA, said, “We are delighted to work with Hurun Report to launch the Global Art List for the third year running. Since 1988, SICA has been a pioneer of China’s auction industry, selling to over a million customers. As a Shanghai-based integrated auction house, SICA is contributing to the internationalization of the Shanghai art market.”

This is a brief English language summary of the full Chinese press release which can be found at www.hurun.net. For media inquiries please contact our public relations team whose contact details can be found at the end of this report.

Who made the Hurun Global Top 10 this year?

German artist Gerhard Richter, 90, stormed to the top of the Hurun Global Art List, with sales of his works at public auction more than doubling to US$256mn, and displacing two-time world Number One David Hockney, 85, who dropped down to 5th. Yayoi Kusama, 93, broke into the Top 3 for the first time, and is the only woman artist in the Top 10. Banksy at 48 is the youngest of the Top 10.  Pierre Soulages, 103, and Peter Doig, 63, broke into the Top 10 at the expense of American artists Ed Ruscha and Wayne Thiebaud, who passed away last year aged 101. 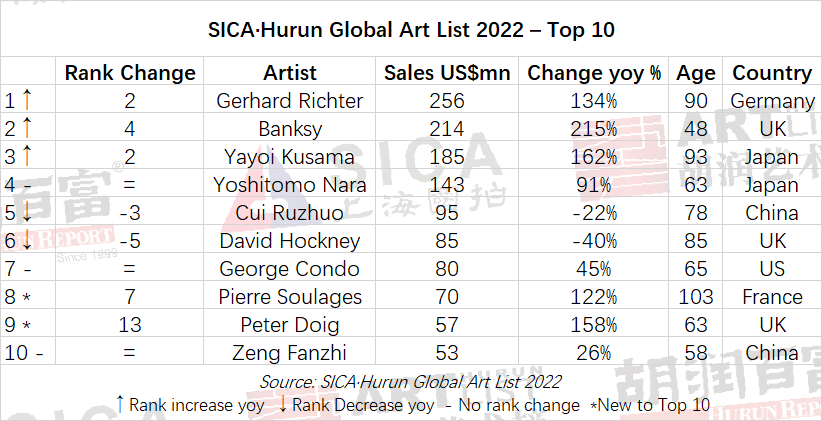 German artist Gerhard Richter, 90, topped the list with US$265mn in sales, up two places from last year and up 134% from the previous year. A total of 308 Richter works were sold last year, including his 1993 abstract painting Abstraktes Bild, which sold by Sotheby's in New York. His works vary in style, including romanticism, photorealism, abstract expressionism, minimalism and pop art.

British street artist Banksy, 48, was second with US$214mn in sales, up 4 places from last year and triple the value of his sales last year. Banksy is the youngest artist in the Top 10. A total of 1,699 Banksy works were sold last year, with his classic work Love is in the Bin (formerly known as Girl with Balloon, which was self-destructed at auction) selling at Sotheby's in London. Known for his satirical art style, Banksy's works are seen on streets around the world.

Japanese artist Yayoi Kusama, 93, ranked third with US$185mn in sales, up two places from last year and up 162% from the previous year. Kusama is the only female artist in the Top 10. A total of 802 of her works were sold last year.

Japanese artist Yoshitomo Nara, 63, was fourth with US$143mn, the same as last year, with sales up 91%. A total of 632 works by Nara were sold last year, with his 2000 painting Whereabouts Unknown selling at the Phillips and Poly auction. Nara's iconic painting of a cute, lonely little girl conveys a sentiment that resonates with young people around the world.

Cui Ruzhuo, a 78-year-old Chinese painter, was 5th with US$95mn in sales, down three places and 22% lower than last year. A group of works by Cui in 2020 became the world's highest-paid work by a living artist last year, sold by Yongle Auction.

Top of the list for the past two years, the British artist David Hockney, 85, ranked 6th with US$85mn, down 40% from the previous year. Of the 755 Hockney works sold last year, the most expensive was his 2000 landscape Guest House Garden, which sold at Christie's in London. Hockney lives in Yorkshire, London and California.

American surrealist artist George Condo, 65, ranked 7 with US$80mn, the same as last year, with a 45% increase in sales. A total of 143 Condo’s works were sold last year, with the most expensive being Reclining Blue Form, which sold at Sotheby's in New York. Kondo's signature style was "mutant surrealism," often featuring squeezed cartoonish faces and a dash of improvisational cubism.

British artist Peter Doig, 63, ranked 9th with US$57mn, increase 158% and up 13 places. A total of 62 works were sold last year. The most expensive work was Swamped, worked in 1990, which sold for US$40mn at Christie's in New York. His works emphasize the abstractness of everyday things and construct vast and dreamy scenes. 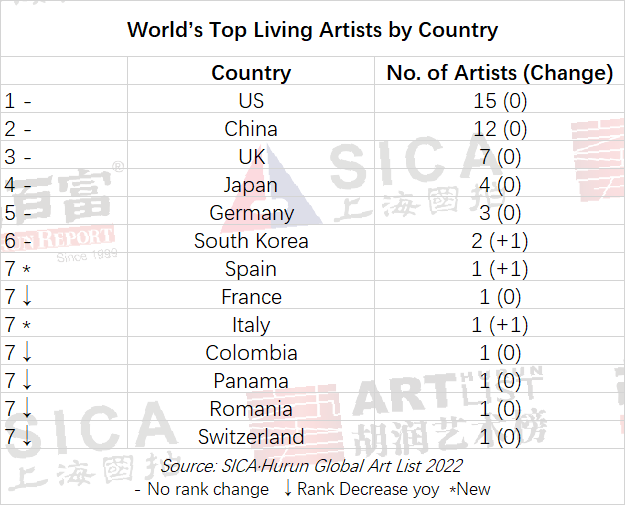 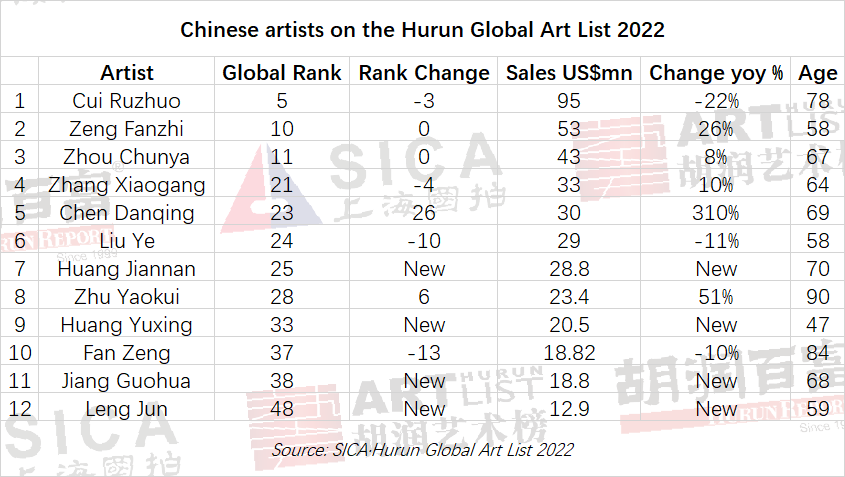 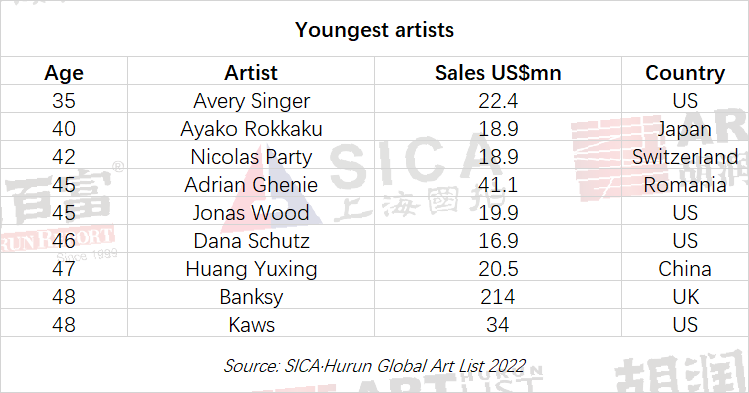 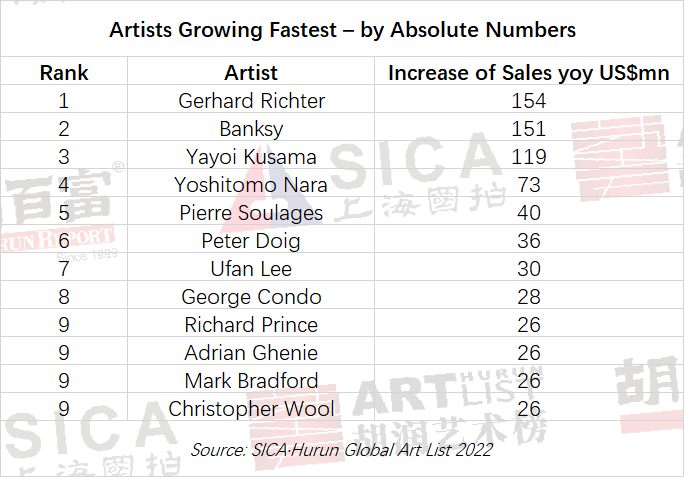 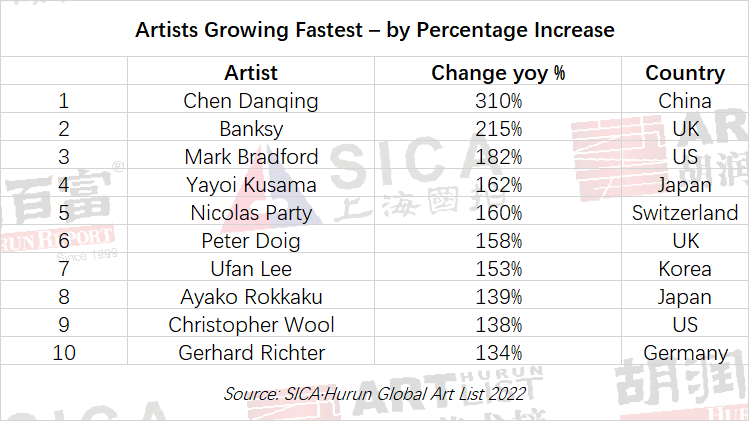 There were 13 new faces this year, up one from last year, led by Jeff Koons. 5 were from the US, 4 from China and 1 from each of South Korea, Spain, UK and Italy. 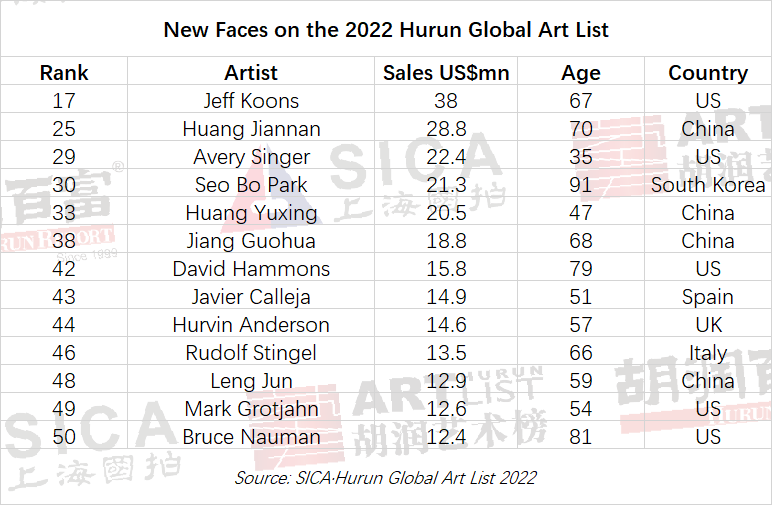 13 artists dropped off the list this year, of which one Wayne Thiebaud passed away aged 101, and the other 12, who did not make the cut this year. Of the 13 artists that dropped off, 7 of them had only been on the list for one year, ie had been new faces last year. Of the drop-offs, 5 were from the US, 4 from China and 1 from each of Latvia, South Africa, UK and Ghana. 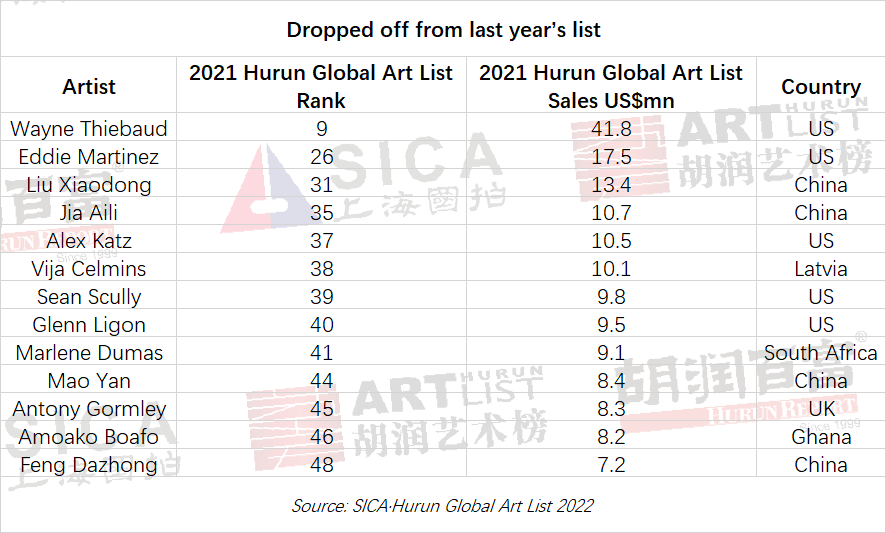 Top 5 artists on the list with the most works sold

Where do the dollar billionaires live?

The Hurun Global Rich List 2022 ranked just under 3400 dollar billionaires from and 69 countries. These reflect where potential collectors reside.

Table: The Top 10 Cities from the Hurun Global Rich List 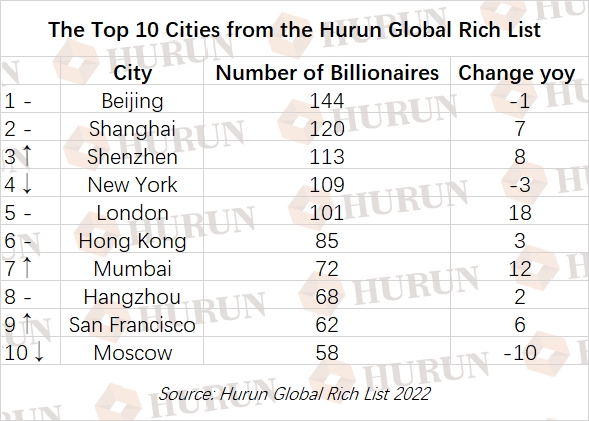 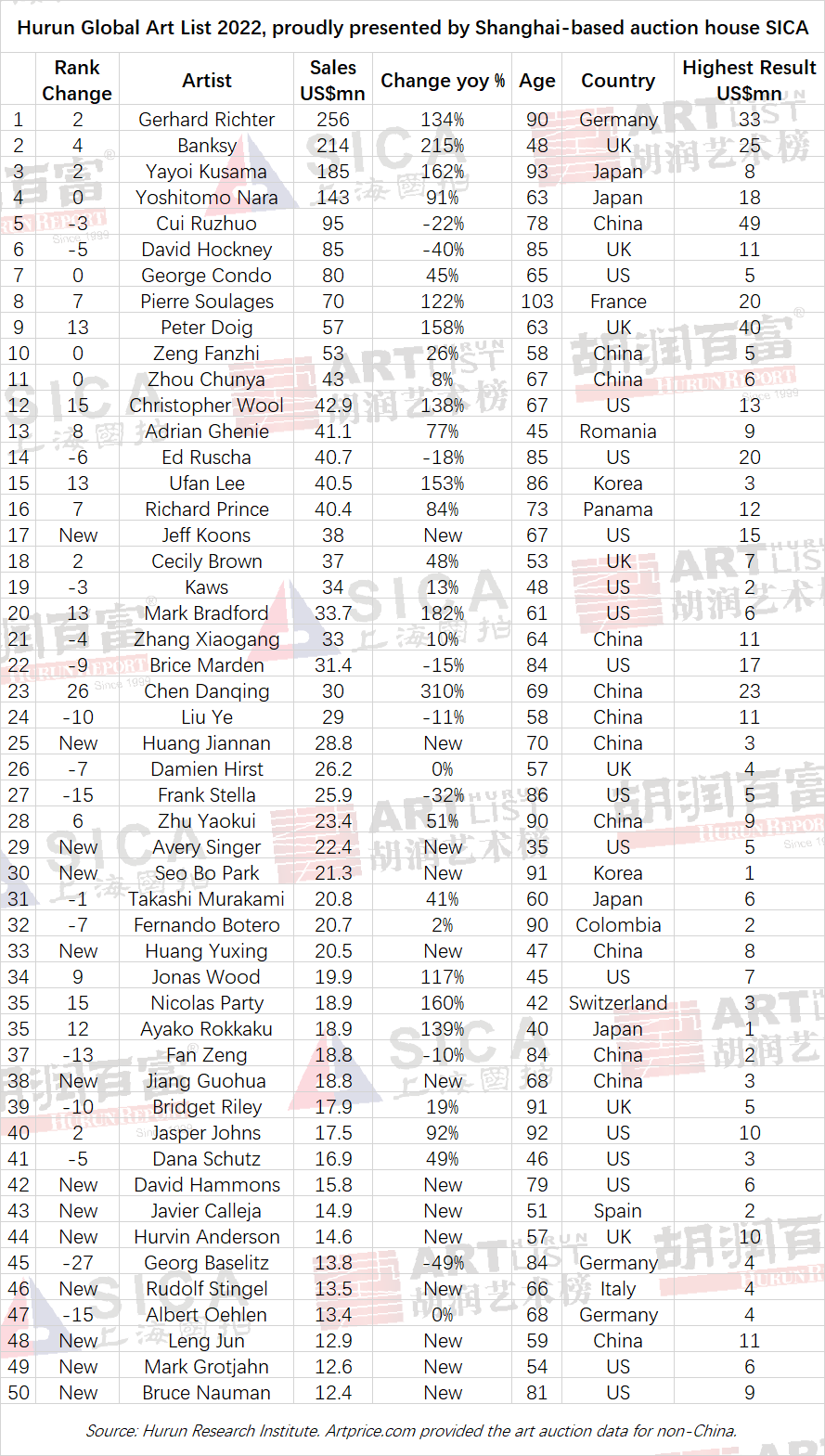 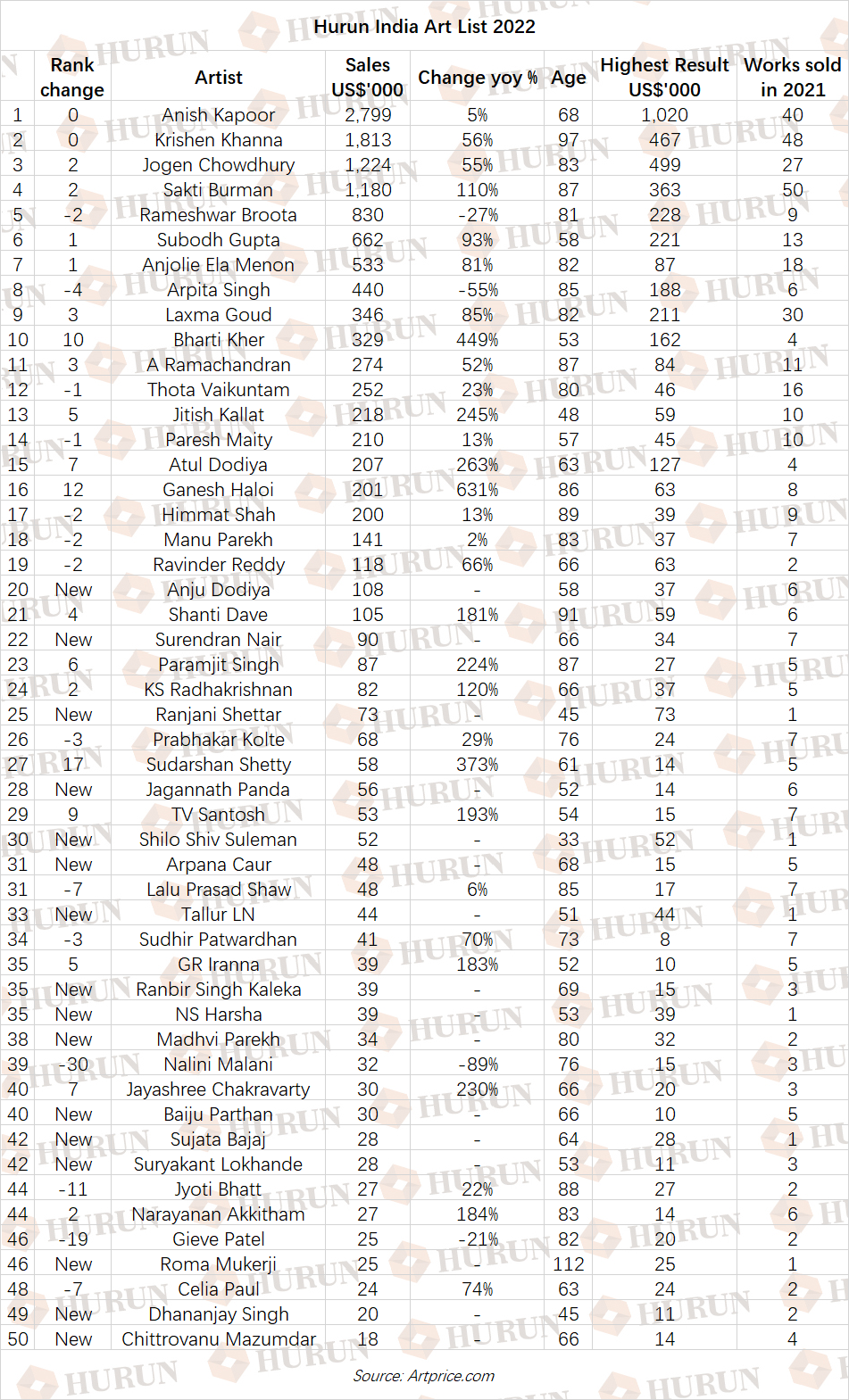 SICA is a professional auction agency providing the disposal of assets, assets realization, relevant assets management and consultation service. Recognized as the leading company in Chinese auction industry, SICA is one of the comprehensive auction companies featured with the most diversified products, the strongest marketing capability and the broadest lines of business including real estates, vehicles, supplies, equipment, cultural relics, artworks, collections and intangible assets, etc. It is the asset disposal platform for lots of financial institutions and state-owned groups, as well as the CIIE “6 days+365 days” perennial display trading platform. It is also a “Shanghai Brand” certified company, and was once elected to be a China Well-known trademark and Shanghai Famous Trademark.

SICA is equipped with a complete corporate governance structure and a strict internal control system. It is also the first company getting through the certification of ISO9001 and ISO27001 in this industry. SICA has become the designated agency for Shanghai monthly uncommercial vehicle quota auction since 1994. With the auction system invented by ourselves, millions of people have already joined in our online auction. This effective auction system has formed into several online auction platforms, including web version, Wechat, etc. The Wechat official account of SICA has millions of followers now, and SICA APP is also in official operation, which provides powerful technical support for our business transformation. At present, 98 percent of our auction has been moved into online platform.

With more and more new market focuses coming to the fore, SICA is now seizing the opportunity, promoting the internationalization, platformization and professionalization actively , to construct a high-quality interaction platform for auction items and resources during the collision of Chinese and Western cultures. SICA also focuses on helping the construction of “Five Centers” and the “Belt and Road Initiative”, and strives to be a Century Brand in domestic auction industry.

Hurun hosted high-profile events in the last couple of years across China and India, as well as London, Paris, New York, LA, Sydney, Luxembourg, Istanbul, Dubai and Singapore. Recent and upcoming events include London on Oct 17, Sydney on Oct 20, LA on Nov 10, Guangzhou on Dec 11, Boston on Jan 14, Abu Dhabi on Jan 23-25 and Mumbai in early Feb, 2023. 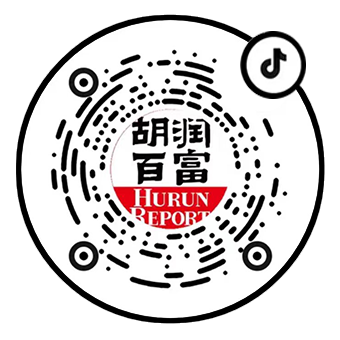 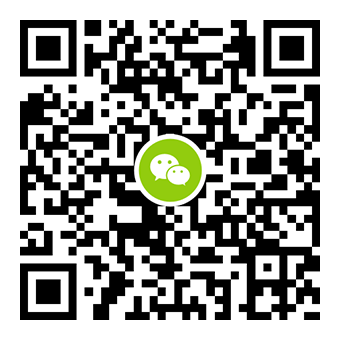 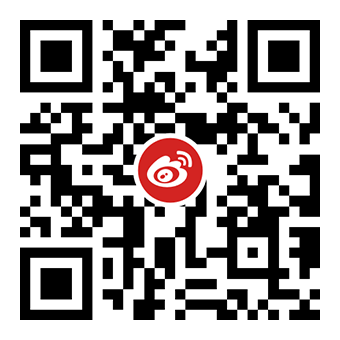